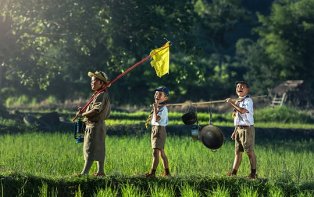 According to the National Day Calendar, “The Boy Scouts of America has roots in the British Boy Scouts organization which was created in 1908 after the success of the book Scouting for Boys by Robert Baden-Powell.  On a foggy day in London an American newspaperman, William Dickson Boyce, became lost when a Boy Scout came to his assistance. With the boy’s guidance, Boyce arrived at his destination. When Boyce offered payment for the assistance, the Boy Scout refused explaining it was a good deed.  Boyce was inspired to organize similar youth groups into one organization. On February 8, 1910, Boyce filed papers of incorporation, and the Boy Scouts of America was born.  Boy Scouts have had a profound impact on the United States.  Many presidents and other dignitaries have been Boy Scouts.  A total of 181 Astronauts have also been a part of the Boy Scout program.”

Incorporated in 1910, the Boy Scouts of America published their first Boy Scout Handbook in 1911. For an list of interesting facts about the Boy Scouts, visit here.

According to NationalCalendarDay.com, one way to observe today is by using #NationalBoyScoutsDay on social media posts.  Additionally, per National Today, three ways to observe National Boy Scouts Day are to “Do a good turn for someone else, learn a new skill, and go camping.”

The author Brigadier General Carl Buhler, US Air Force (retired) is currently the CEO and Lead Consultant of Buhler Consulting, LLC which specializes in providing consulting services covering aircraft maintenance, technology, SBIR, supply, logistics and production. Carl is a career aircraft maintenance, munitions, and logistics officer and was a member of the Cub Scouts and Webelos while growing up.  Carl has also served as a Webelos Den Leader and Boy Scout volunteer.  He is also a member of the Veterans of Foreign Wars and the American Legion.